Solutions to our puzzles in the Corvallis Gazette Times and Albany Democrat are below. Click the date tab to find the solution in that Saturday's publication. Look for more puzzles from us to come in the puzzle section of the Saturday papers.

The puzzle and solution for the March 8 paper will be published on Wednesday at  Noon. Check back then! 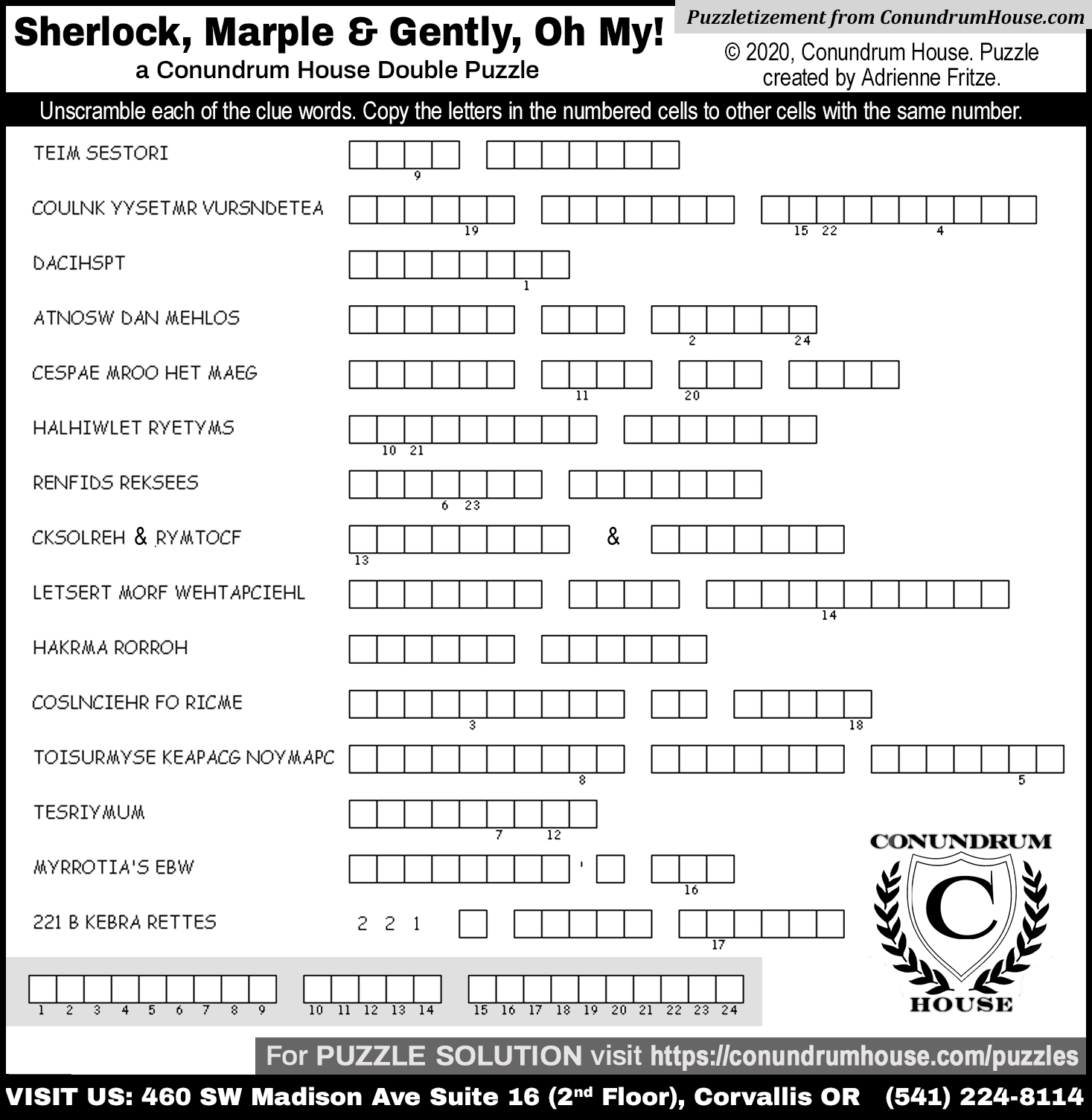 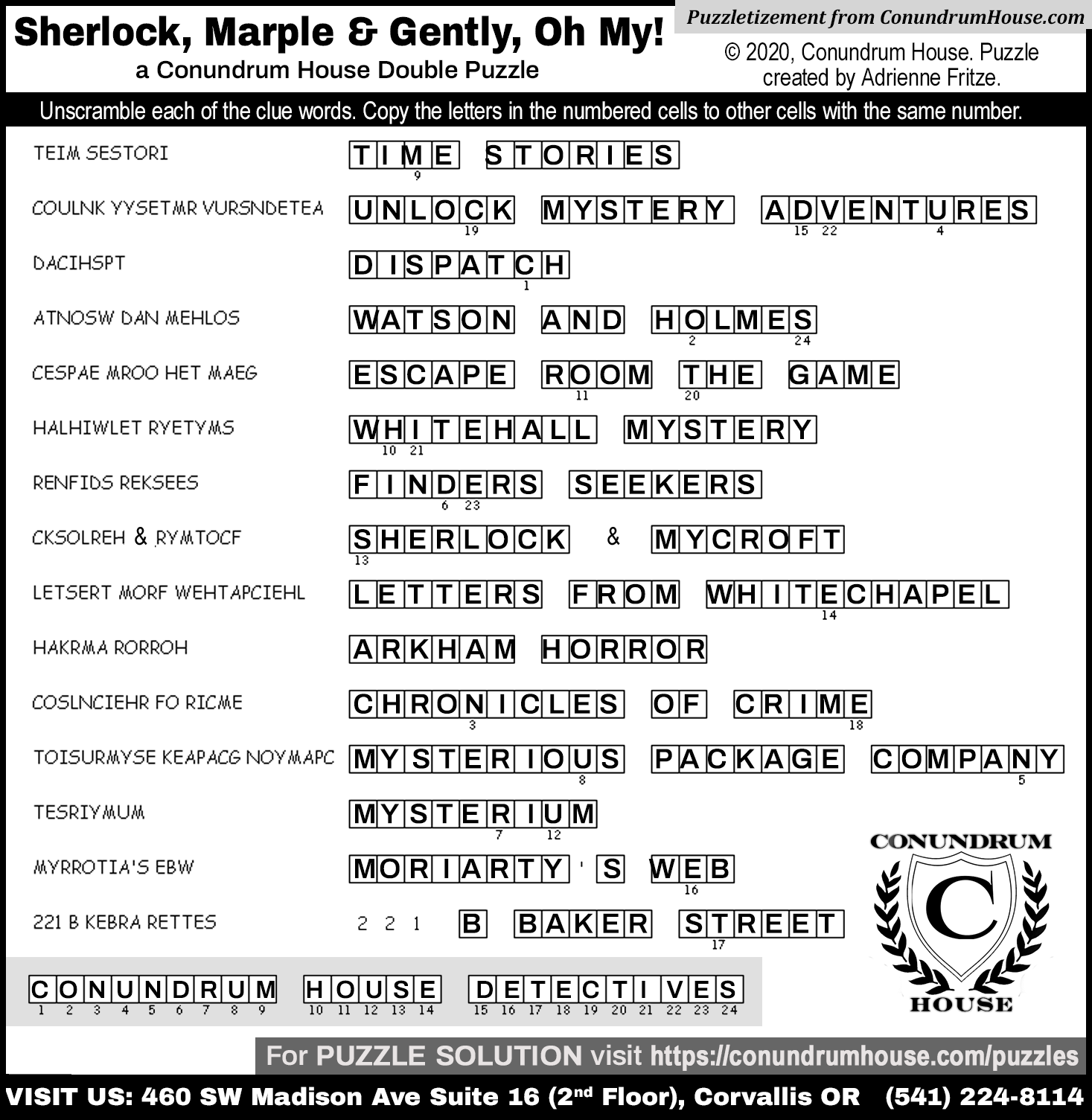 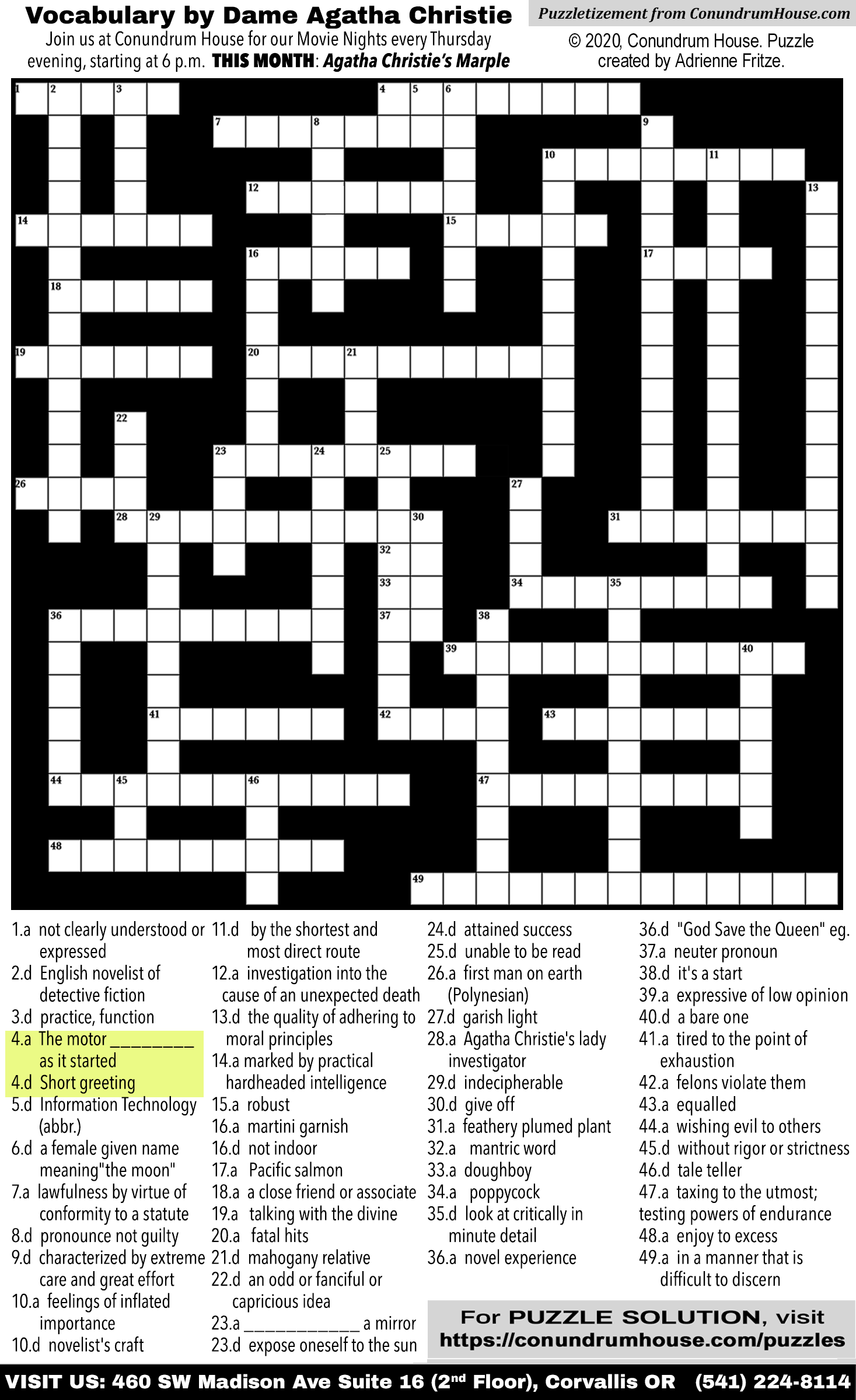 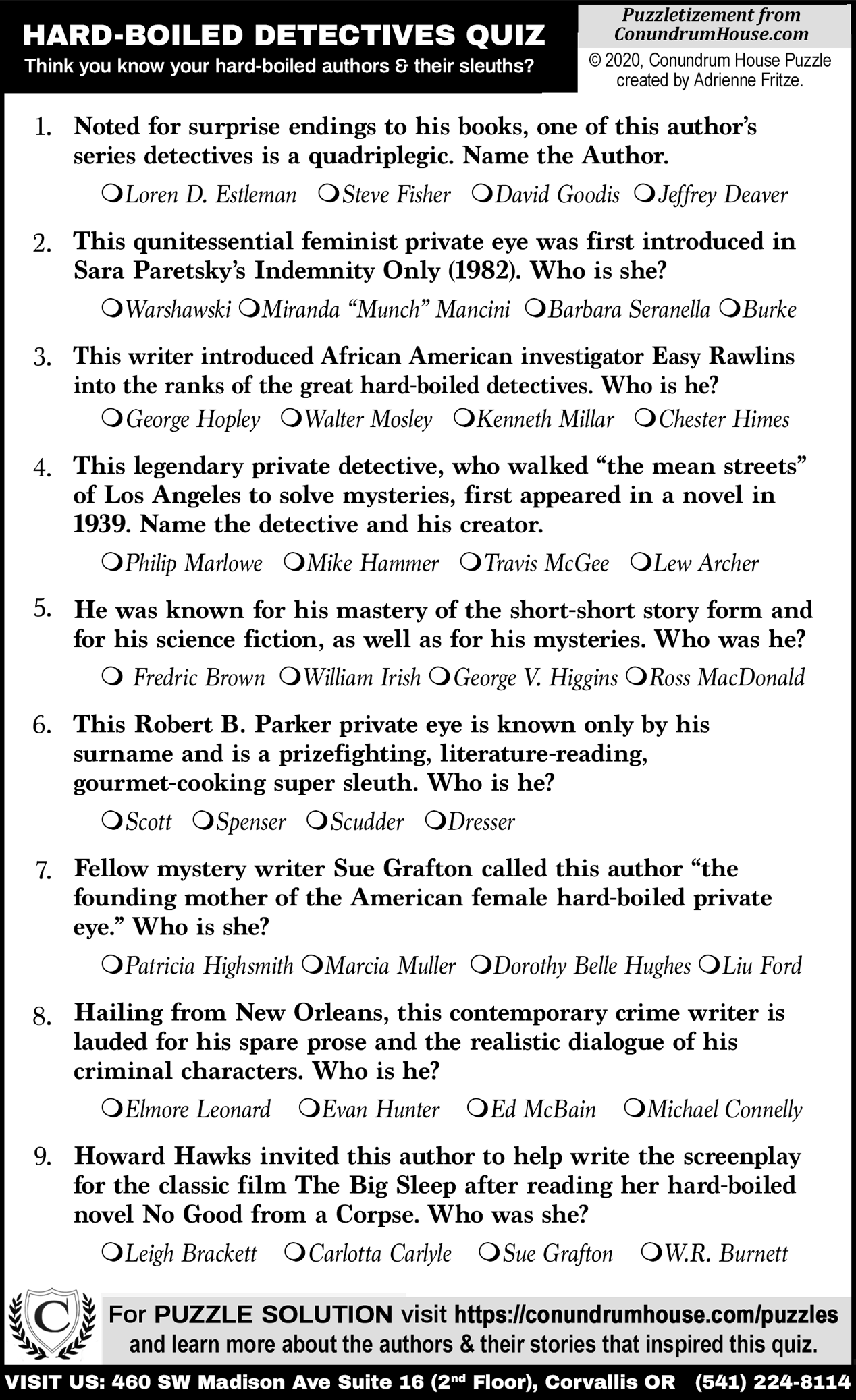 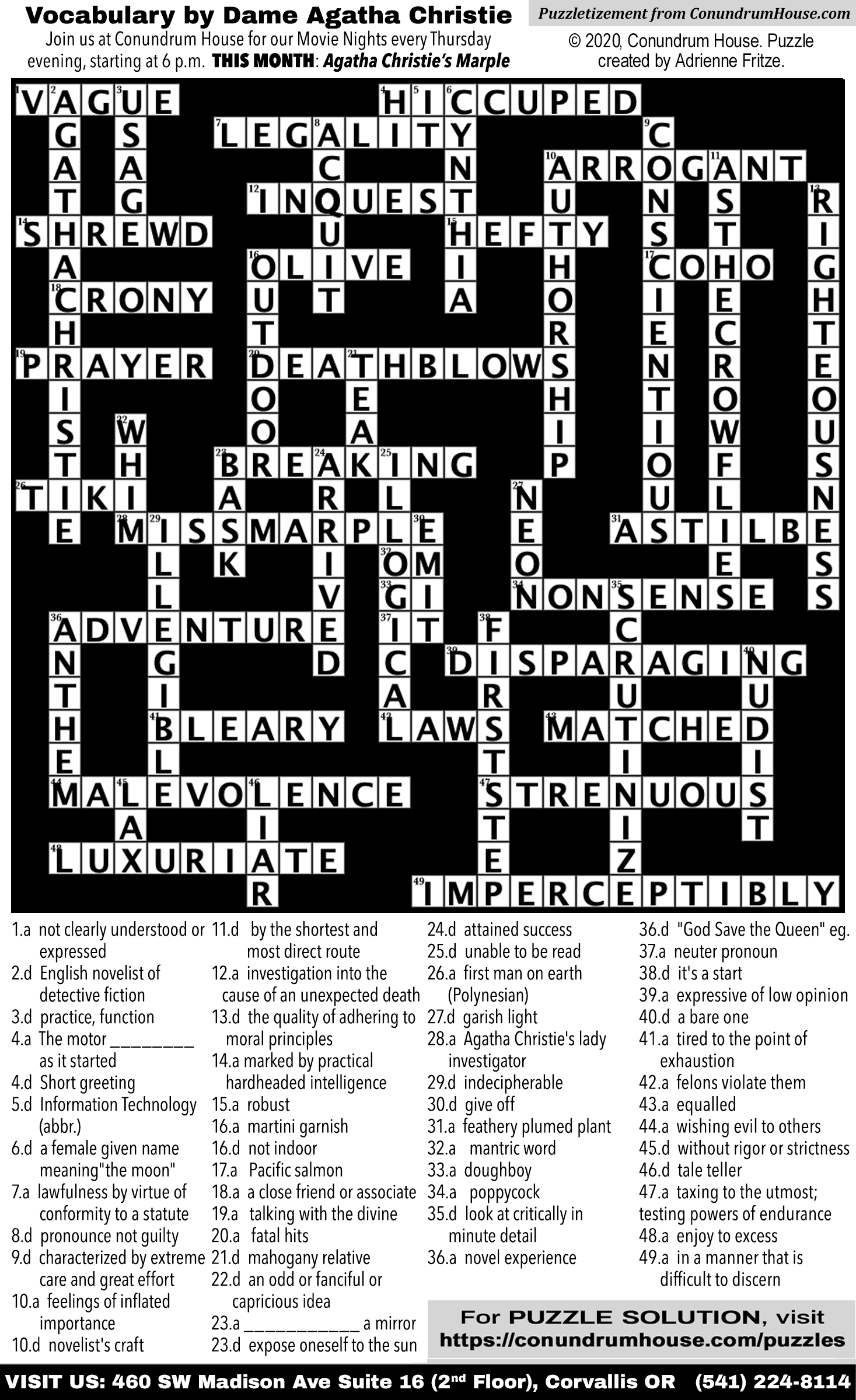 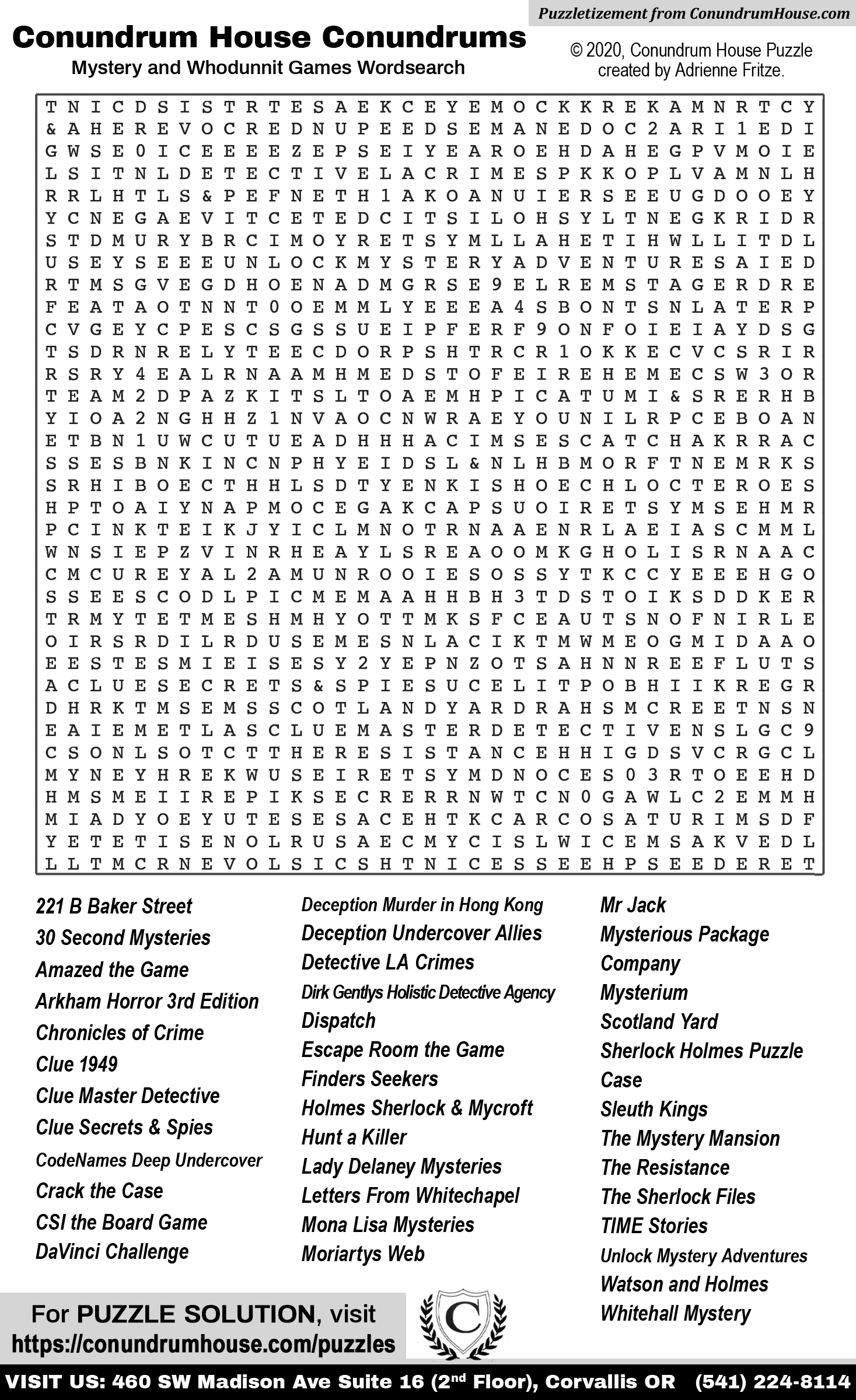 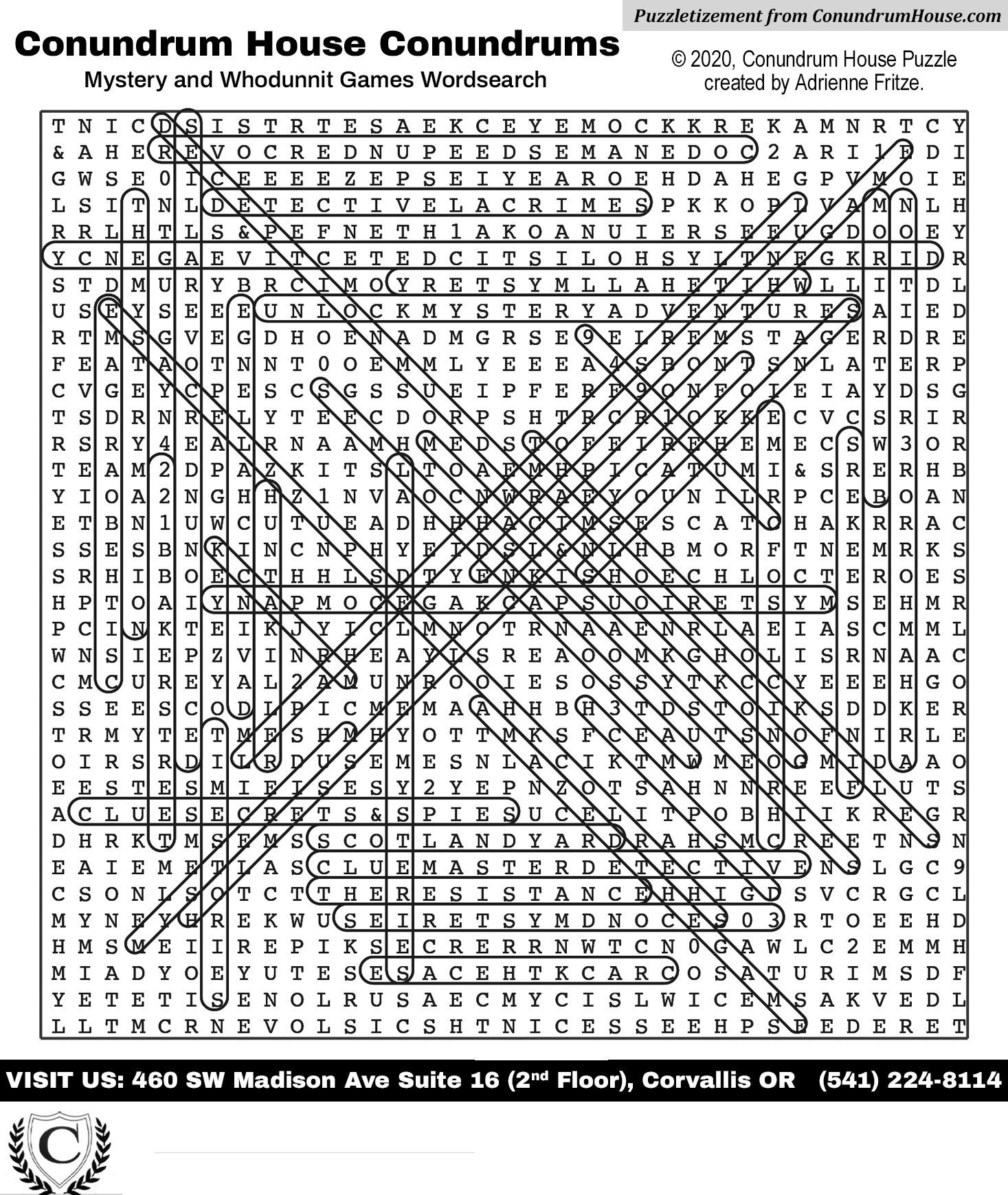 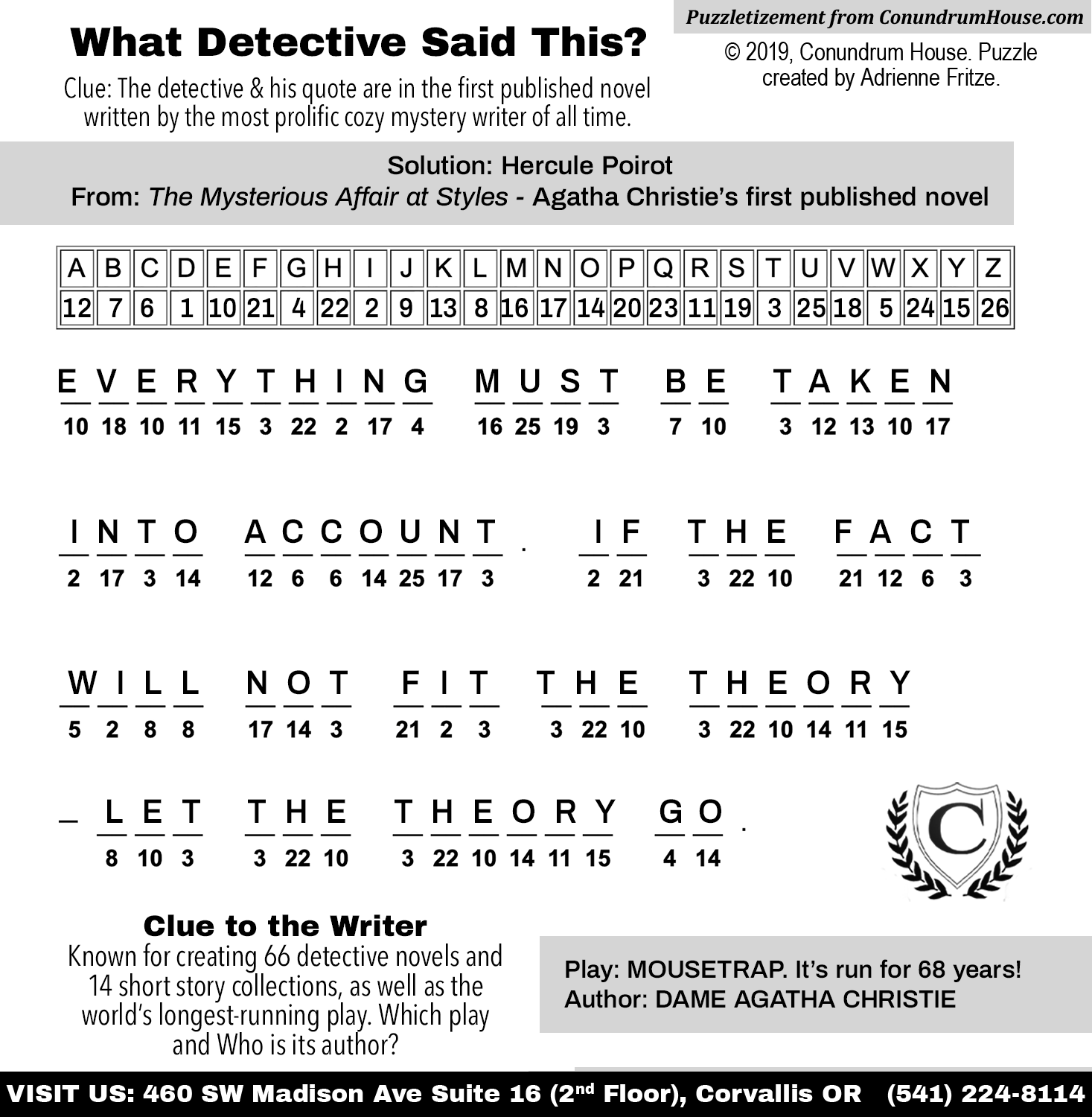 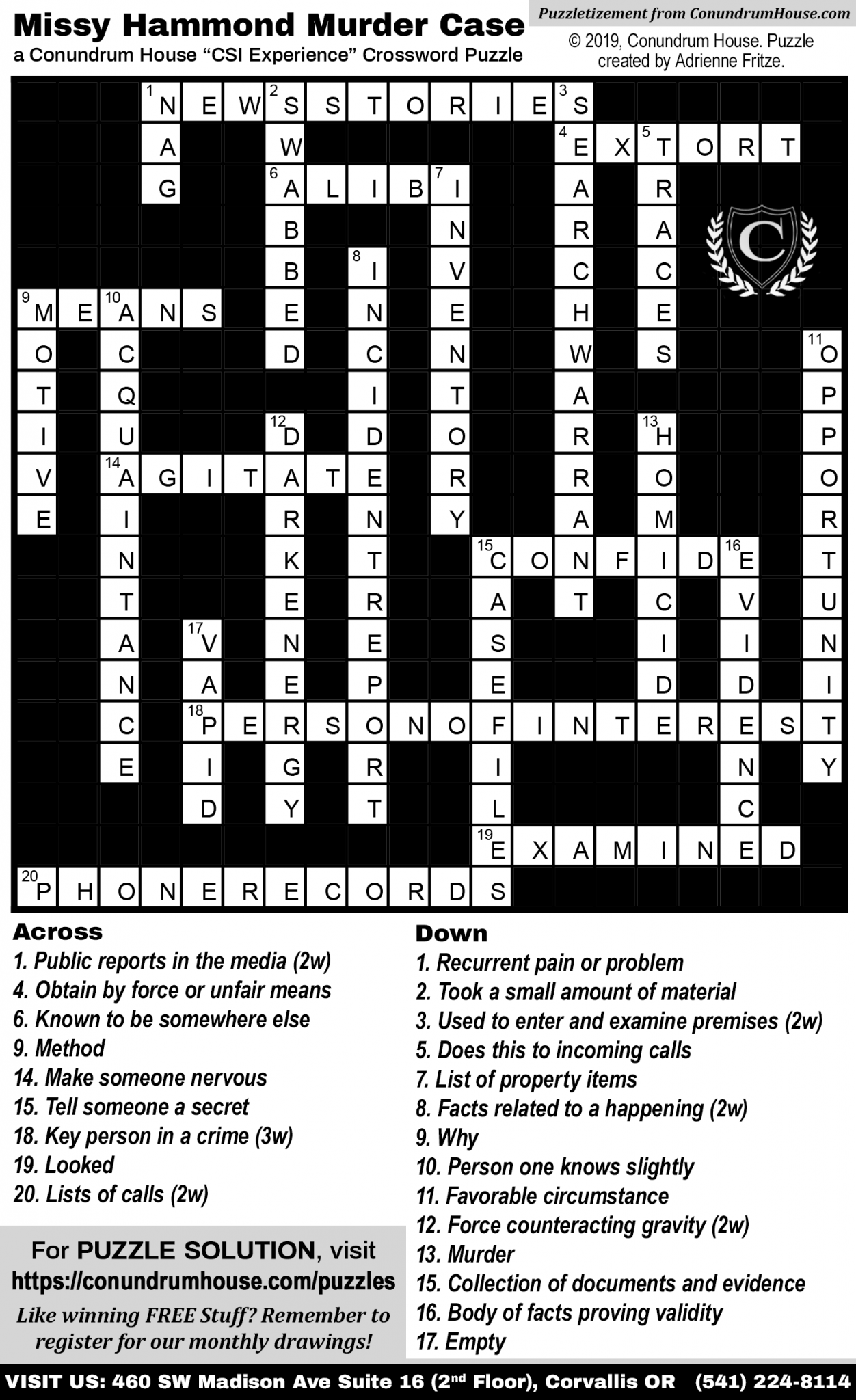 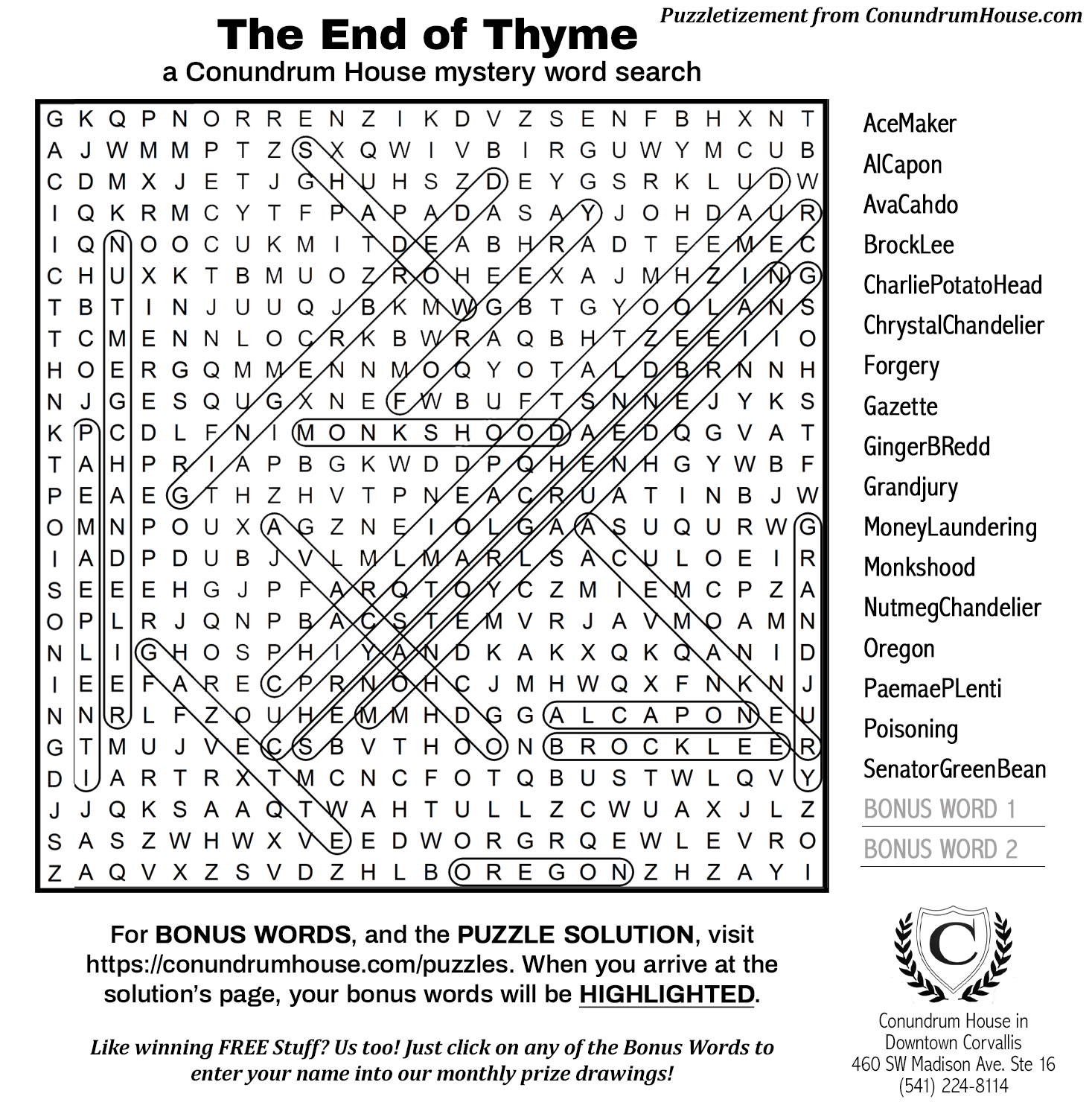 1. Noted for surprise endings to his books, one of this author’s series detectives is a quadriplegic. Name the Author.

Jeffery Deaver (b. 1950) has defined “the typical Deaver novel: one that features strong (though possibly flawed) heroes, sick and twisted bad guys, deadlines every few chapters, a short time frame for the entire story (eight to forty-eight hours or so), lots of surprising plot twists and turns and plenty of cliffhangers.” His character Lincoln Rhyme, a quadriplegic New York City detective and forensic expert, partners with policewoman Amelia Sachs, who searches crime scenes for evidence that Rhyme can interpret. The series kicked off with The Bone Collector (1997); the eighth novel, The Broken Window, appeared in 2008. Deaver deals with timely topics—The Broken Window takes on data mining and identity theft. His books have won both American and international awards, including the Steel Dagger from the British Crime Writers' Association. He has also received five Edgar® nominations. In addition to the Rune trilogy and John Pellam series, in 2006 Deaver introduced Kathryn Dance, a special agent with the California Bureau of Investigation.

2. This qunitessential feminist private eye was first introduced in Sara Paretsky’s Indemnity Only (1982). Who is she?

Chicago native V. I. (short for Victoria Iphigenia, but friends call her Vic) Warshawski is a hard-boiled detective devoted to her close circle of friends and family, who constantly keep her busy cracking cases. Warshawski effortlessly marries the traditionally virile attributes of a private eye with her own feminist concerns; she uses her wits and weapons to solve crimes and also indulges a passion for opera and fashion. Like her creator, Sara Paretsky (b. 1947), V. I. feels strongly about social justice and fights institutionally sanctioned unfairness; her targets perpetrate white-collar crime. V. I. is also different from the loner knights of investigation in that she is more concerned with honoring relationships and morals than client obligations and works in tandem with friends to promote the social good. The V. I. novels include Blood Shot (1988), Guardian Angel ( 1992), Hard Time (1999), Blacklist (2003), and Fire Sale (2005). Paretsky novels that don't feature V. I. include Ghost Country (1998) and Bleeding Kansas (2008).

3. This writer introduced African American investigator Easy Rawlins into the ranks of the great hard-boiled detectives. Who is he?

In his 1990 novel, Devil in a Blue Dress, Walter Mosley (b. 1952) introduced Easy Rawlins, a private eye living in Los Angeles after World War II. Mosley grew up in L.A., where his father settled, like Rawlins, after leaving Texas. He depicts the inhabitants and atmosphere of the Watts neighborhood, where violence takes place on a personal, as well as a community-wide, scale. Denzel Washington starred as Rawlins in a 1995 film version of Devil in a Blue Dress. Mosley has also published multiple books about protagonists Fearless Jones and Socrates Fortlow and has written science fiction and political nonfiction. In 2009 he debuted Leonid McGill in The Long Fall; McGill is a Manhattan Pl who, although he once took on disreputable jobs, has “decided to go from crooked to slightly bent.” In all his work, Mosley believes stylistically “that writing should be a clear pane of glass. There's a story on the other side of the glass and [the reader] shouldn't be distracted by the lens.”

4. This legendary private detective, who walked “the mean streets” of Los Angeles to solve mysteries, first appeared in a novel in 1939. Name the detective and his creator.

Philip Marlowe, an ethically complex private eye who lived in Los Angeles, a city as finely delineated as Marlowe's character, was created by Raymond Chandler (1888-1959). Marlowe, debuting in The Big Sleep, was a twentieth-century knight rescuing damsels in distress. Chandler described his archetypal noir protagonist in an essay, “The Simple Art of Murder,” that became a manifesto for the hard-boiled school: “Down these mean streets a man must go who is not himself mean, who is neither tarnished nor afraid … He is the hero, he is everything. He must be a complete man and a common man and yet an unusual man. He must be … a man of honor … He is a lonely man and his pride is that you will treat him as a proud man or be very sorry you ever saw him.” Chandler describes the world in vivid similes that raise his novels-including Farewell, My Lovely and The Long Goodbye (an Edgar® winner in I955)—to the status of literary classics.

5. He was known for his mastery of the short-short story form and for his science fiction, as well as for his mysteries. Who was he?

Fredric Brown ( 1906-1972) particularly excelled at one-to-three-page “short-short” stories characterized by their clever plotting and twist endings. He also established his reputation as an author of full-length crime novels in the late I940s, starting with his Edgar® Award-winning first novel, The Fabulous Clipjoint (1947), which introduced the nephew/uncle team of Ed and Am Hunter. Ed, who debuts as a teenager, matures into a successful detective in the seven additional books that make up the series, including The Bloody Moonlight (1949), Death Has Many Doors (1951), and Mrs. Murphy's Underpants ( 1963). Brown's other forays into crime fiction tended toward the macabre, including the classics The Far Cry (1951) and The Screaming Mimi (1949), a terrifying tale in which a reporter searches for a Jack-the-Ripper-style killer. This book was made into a film starring Anita Ekberg and Philip Carey in 1958.

6. This Robert B. Parker, private eye is known only by his surname and is a prizefighting, literature-reading, gourmet-cooking super sleuth. Who is he?

Spenser, named for the English Renaissance poet Edmund Spenser, is a modem revision of the classic Chandleresque hard-boiled detective: he can spout sonnets, contemplate the eternal verities, cook an exquisite supper, champion equality for all, and still whip criminals into shape. His sensitive sensibilities, while layering his character and qualifying him to grapple with contemporary moral questions, in no way undermine his ability to best any opponent in contests requiring physical prowess. Though writing squarely in the tradition of Chandler (at one point he even completed Chandler's unfinished novel, Poodle Springs, and followed it with an original Philip Marlowe novel, Perchance to Dream), Robert B. Parker (b. 1932) has flavored the legacy by addressing ethical quagmires and developing relationships between Spenser and female and minority characters reflective of modem progressive attitudes. Parker received an Edgar® for Best Novel for The Promised Land in 1977, received an Edgar® nomination in 1990, and was named Grand Master by Mystery Writers of America in 2002.

7. Fellow mystery writer Sue Grafton called this author “the founding mother of the American female hard-boiled private eye.” Who is she?

With the creation of Pl Sharon McCone in the 1977 novel Edwin of the Iron Shoes, Marcia Muller (b. 1944) launched the first American series to feature a female professional sleuth who did not inherit the business from another detective. She has also created Elena Oliverez, a museum curator, and Joanna Stark, a security expert, each of whom appears in her own series. “I am attempting to explore various problems of contemporary American society through the eyes of women who become involved in situations which compel them to seek the solutions to various crimes,” wrote Muller. “They reach beyond their normal capabilities and grow and change accordingly.” Author of more than thirty-five novels, Muller collaborated on three of them with her mystery-writing husband, Bill Pronzini. She received one Edgar® nomination in the Best Critical/Biographical category with Pronzini. She was also nominated for Best Novel in 1994. In 2005 Mystery Writers of America named Muller Grand Master.

8. Hailing from New Orleans, this contemporary crime writer is lauded for his spare prose and the realistic dialogue of his criminal characters. Who is he?

Elmore Leonard (b. 1925) is one of the most popular and adept American crime novelists. His narratives offer convincing depictions of people from every walk of life, each speaking in his or her own unmistakably authentic patois. His books include The Big Bounce (1969), Swag (1976), Road Dogs (2009), and The Hot Kid (2005), a historical crime novel set in I920s and I930s Oklahoma. Many of his books have been made into TV movies or films. He wrote the screenplays for some of them, including Get Shorty (1995). A master of dialogue, he declared in the essay “Easy on the Hooptedoodle,” written for the New York Times in 200I (the basis for the book Elmore Leonard's Ten Rules of Writing), “My most important rule is one that sums up the 10: If it sounds like writing, I rewrite it.” Leonard garnered two Edgar® nominations and won the 1984 Edgar® for Best Novel for La Brava. He was named Grand Master by Mystery Writers of America in 1992.

9. Howard Hawks invited this author to help write the screenplay for the classic film The Big Sleep after reading her hard-boiled novel No Good from a Corpse. Who was she?

Better known for her science fiction and fantasy, Leigh Brackett (1915-1978), who also wrote some Westerns, won acclaim as a crime writer for her debut mystery, No Good from a Corpse (1944). It also earned her a place as co-screenwriter for the film noir masterpiece The Big Sleep ( 1946), starring Humphrey Bogart. Director Howard Hawks had admired her punchy Chandleresque dialogue and invited “this guy Brackett” to write the screenplay with William Faulkner. She later wrote the script for an adaptation of Chandler's The Long Goodbye, directed by Robert Altman. Brackett ghost-wrote the mystery Stranger at Home (1946) for actor George Sanders and went on to pen The Tiger Among Us (1957), An Eye for an Eye (1957), and Silent Partner (1969). Brackett also wrote teleplays for the series Checkmate and Suspense and worked on the screenplay for George Lucas's blockbuster The Empire Strikes Back.